At the opening ceremony, the President Ernesto Zanetti handed over to some authorities of Zala and to some members of the organizing staff the “Certificate of Merit” prepared for the Jubilee of the event.

“I am happy – said the President – that we can finally find ourselves all together and I am really very happy to verify that the Corona Virus has not damaged any member of the Alpe Adria Family.

On the other hand, I am very worried because the health emergency is not over yet and another one is already looming, the economic one, which is ferociously biting all European nations. We must all be ready to help the organizers for the best outcome of the competition and we hope that the authorities can support them also for next year”.

The match suffered from the absence of the teams from Bosnia Hercegovina, Croatia and Slovenia but, despite this, the participation was very consistent.

28 athletes, including 4 women, divided into two competition groups of 14 athletes each, belonging to the representatives of the Niederösterreich (AUT) of Friuli Venezia Giulia and Veneto (ITA) and of the local Zalaeszerceg (HUN) fought each other, giving life to a wonderful very pleasant and friendly atmosphere, on the platform of the Palasport of Zala.

Once again, the Veneto won with 21 points, but this time it had to sweat a lot, pursued by a very combative Friuli who finished with the same score (21) but second place for the number of participants. In third place, with 11 points, the representative of the Niederösterreich who exhibited the oldest athlete of the event (the eighty-seven-year-old Kurt Bohatschek) and last the hosts Team of Zala led by the indomitable Peter Papp, outsider of Class “B”.

Veneto doubled for the two cups of “Best Athlete of the Event” made available by the Honorary President of Alpe Adria Marcello Zoratti, assigned to Maria Vittoria Sportelli for women (217.60 points) and to the “stainless” Franco Omaggio for man (392.50 points).

The appointment is once again in Zala for Saturday 3 June 2023 for the 57th edition of the tournament. It will be the final edition of the 7-year cycle that began in 2015 in Udine and which, due to the 2-year of “stop” imposed by the Corona Virus epidemic, will end in 2023.

The 56th Alpe Adria International Weightlifting Tournament, the oldest international event on the IWF and EWF calendar, was held in Ljunbljana (SLO) on 17th of September, 2022.

After the happy intuition of the President of the Slovenian Federation Damjan Ćanžek, the event was organized at the same time as the “Ljublana Open Tournament”, reserved for the youth athletes (Under 17 and Junior) of some European nations.

Athletes from Alpe Adria was entitled to compete with those from France, Malta and Belgium.

“I am very happy to restart the activities in the presence after the forced and painful stop imposed for two years by the pandemic” – declared the President of Alpe Adria Ernesto Zanetti at the opening ceremony – “and I am also pleased to note that the Corona Virus did not damage any member of the large Alpe Adria family. I am also very much in favour of the idea that athletes from other European nations can also participate in the Adria competitions, which brings together regions and nations of three different cultures, Latin, Slavic and German, sharing similar traditions.”

The competition was masterfully organized into four groups, the Under 17, Under 20 and Senior Men’s classes, and the Women’s classes, also divided but which competed in a single group of 18 athletes.

The Alpe Adria competition was dominated by the Friuli Venezia Giulia representative, led by Mattia Longhin, winner of the Under 17 class, by Simone Val, winner in Junior and by Cristiano Ficco winner in Senior. The ranking sees Friuli Venezia Giulia in first place with 1,312 points, followed by Veneto with 1,140 and the Austrian region of Niederösterreich with 1,134, the latter set in the Women’s class with the strong Sara Fischer.

The overall ranking of the 7 years of the Alpe Adria Tournament (forced to be extended to 9 due to the stop fo the epidemic) sees Friuli Venezia Giulia at the top of the provisional ranking, after 6 editions, with 6,863 points, followed by Veneto with 6,464, at the third place was Niederösterreich with 6,230, followed by Slovenia with 6,037, Croatia with 5,552, Bosnia Hercegovina with 5,409 and the Hungarian region of Zala with 5,409.

The final of the multi-year cycle that will definitively award the Super-trophy will take place in Zala (HUN) on 3 June 2023.

The contemporary Ljubljana Open Tournament was leaded by the large French representative with 1,071 points, followed by Belgium with 680 and by the Italian representative who, surprisingly, managed to get on the podium despite participating with only 2 athletes. 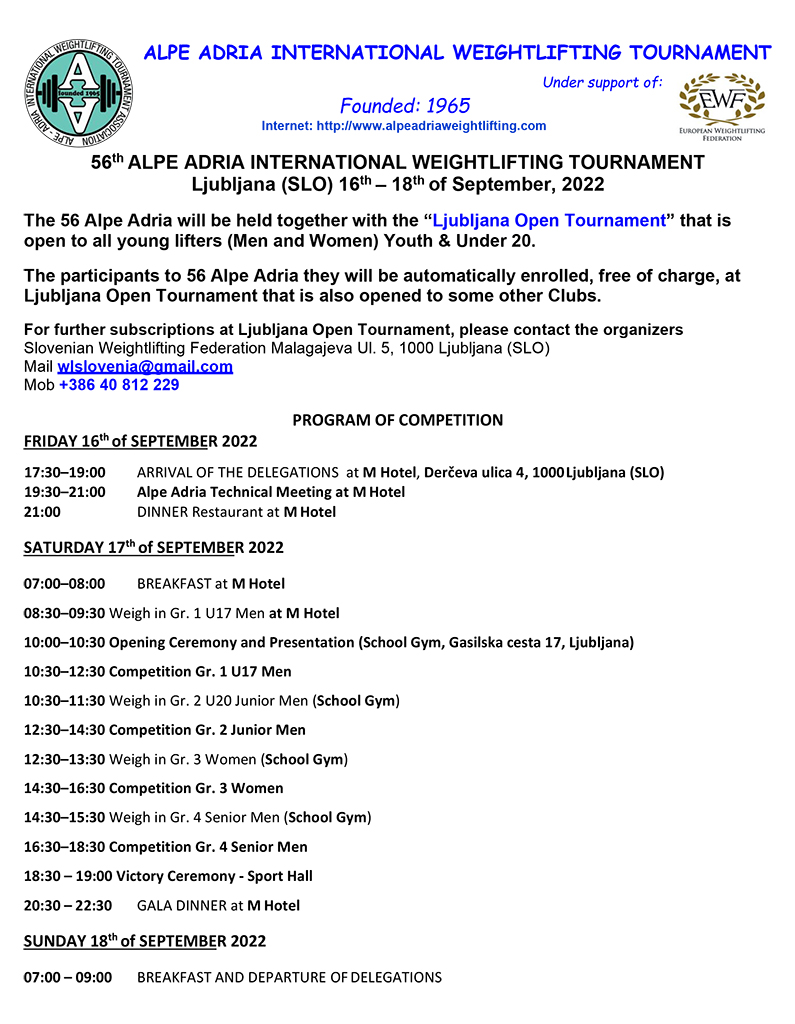 To be send to:

I am sending you a summary of the decisions to update the Alpe Adria competitions from 2021 to 2022, taken during the Alpe Adria Congress held via videoconference on Saturday 17/04/2021.

Unfortunately in 2020, due to the dramatic spread of the Corona Virus pandemic, in order to defend health we were forced to cancel the competitions, originally scheduled in Ljubljana (SLO) on Saturday 6th June 2020 (56th Alpe Adria) and in Zala (HUN) Saturday 17 October 2020 (20th Alpe Adria Master).

We had also been forced to postpone the Congress that had been scheduled in Ljubljana (SLO) for Saturday 18 April 2020, by one year.

The painful decision to postpone the competitions for another year was unanimously taken by the Congress held in Videoconference on April 17th 2021 with the aim of safeguarding the health of the athletes, technicians and organizers who would be involved in the competitions, since the situation is still far from clear.

We also had to consider the difficulties, reported by everyone, relating to the problems of crossing the border.

The considerable financial difficulties of the organizers who find themselves in serious economic difficulties deriving both from the “lock downs” imposed by all governments in the attempt to counter the spread of the virus, both for the fact that the authorities have hijacked the funds that previously allocated to sport, to fight the pandemic, was also considerate.

Even the availability of the hotels where to lodge the participants is still, at this moment, not sure.

Taking care of all these problems, moving the Alpe Adria competitions for another year (from 2021 to 2022) is certainly a very difficult decision, but also the most reasonable one.

Consequently, the seven-year cycle of Alpe Adria, which originally was scheduled from 2015 to 2021, will be longed until 2023.

In relation to this cycle, I send you, herewith, the full calendar of the competitions carried out (in green color) and of those still to be organized until 2023 (in blue color).