During the years, other bordering countries/regions were gradually admitted to participate. Currently, the regions/countries with the right to participate are Bosnia and Herzegovina (BIH), Croatia (CRO), Slovenia, (SLO), Friuli Venezia Giulia (ITA), Niederösterreich (AUT), Veneto (ITA), and Zala (HUN).

The event was born at the time when the Berlin Wall was dividing populations of similar traditions. During the first “heroic” years, it allowed to build a real “bridge” of friendship through sport, in an area defined as “Mittel-European”, with the aim of being the meeting point for three “cultures”: the Latin, the Slavic and the German one.

The objectives of the annual meetings , which usually take place every year during the first weekend of June in one of the participant regions/countries on a rotation basis, are, in fact, the strengthening of the existing strong friendship bonds and the exchange and deepening of the technical knowledge of different schools.

The teams of each region/country will cover the whole range of athletic potential. In effect, every team will be composed of 1 female and 3 male athletes: 1 Under 17, 1 Junior and 1 Senior. The ranking will be determined by summing up the Sinclair score obtained by all the athletes of the team.

In each competition the first three teams in the ranking will receive a prize, and the first ranked will temporarily be assigned the “Super Trophy”, which will definitely be awarded at the end of the 7 year cycle to the region/country which will have obtained the top score (sum of all the scores obtained over the  7-year cycle).

In 2003 was also created the Alpe Adria Master Tournament, which takes places every year in November. Thanks to this event, many athletes can continue their sports career, allowing them to compete and meet their old friends on the platform annually.

In Ljubljana, at the official Alpe Adria headquarters, on 7th June 2014 it took place the handover between outgoing President Marcello Zoratti and incoming President Ernesto Zanetti, who will be in charge for the 2015-2021 cycle, and between Mr. Peter Žagar and Mr. Jože Zaluberšek, who has become the new Secretary General.

Mr. Marcello Zoratti, who is the Alpe Adria founder and “former President”, has been nominated lifetime Honorary President of the event. 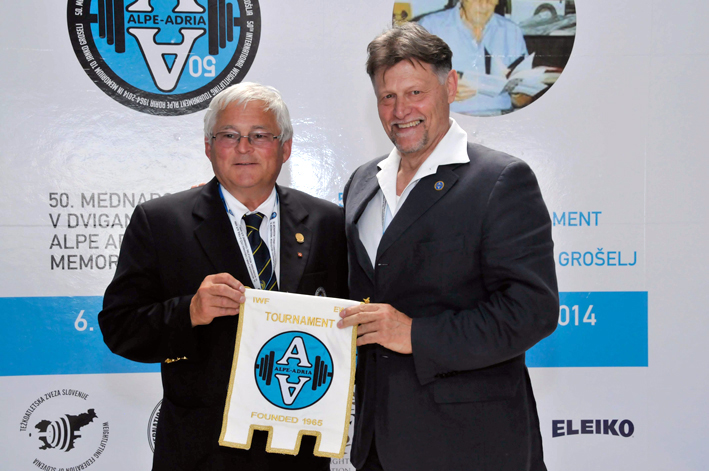